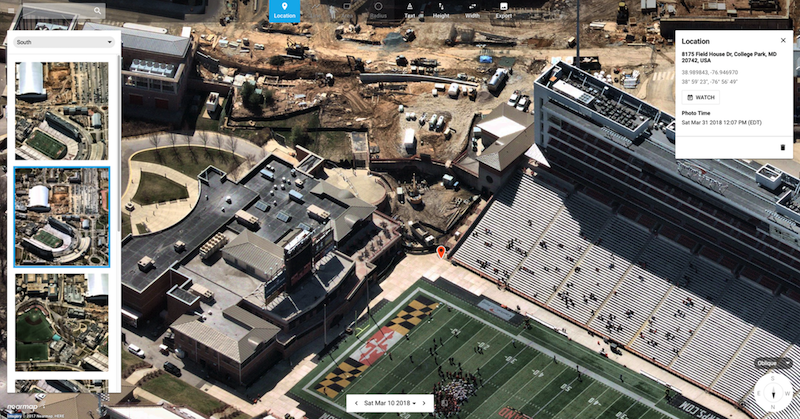 Nearmap’s aerial imagery helps its clients save money and time, while improving their performance.

When construction companies buy a drone to take aerial photos, it requires a substantial commitment. Not only do they have to make the investment in the drone, “They require a specialized skill set,” Tim Frank says. “You have to be able to fly it, and then you have to be able to maintain the imagery.”

Frank is the vice president of marketing for Nearmap US Inc., which takes these responsibilities out of its clients’ hands. The company, which has its U.S. headquarters in South Jordan, Utah, offers high-resolution aerial imagery for multiple sectors, including construction and real estate.

Nearmap started operations 10 years ago in Australia, flying planes equipped with special camera systems at altitudes of up to 18,000 feet. Today, the company regularly captures 430 of the largest urban areas of the United States, in addition to Australia and New Zealand.

That photography is available via the cloud through a subscription service that Nearmap offers its customers. “We’ve found the sweet spot where we capture urbanized areas in the United States that represent over 70 percent of the population,” Frank says.

Product Marketer Angela Catalan adds that Nearmap’s model sets it apart from other image providers. “Consumers of imagery are used to receiving imagery on a hard drive,” she says, noting that access to images via the cloud saves time for Nearmap’s clients. “Now they have the choice with no lag time – they can choose to connect to our imagery from their existing workflows, or simply jump on the MapBrowser.”

Nearmap offers orthographic maps, multi-perspective panoramas and oblique aerial views. But all of them, Catalan notes, can be viewed in a seamless mosaic once users subscribe to its site. “You also can move around broad areas of land, and have access to all historic imagery at your fingertip,” she says.

“One pixel on the screen represents three inches of area on the ground,” Catalan continues. “It’s usually several times sharper than most free satellite images.”

Catalan, who works with Nearmap’s team in Australia, focuses on understanding its clients and how they use the company’s imagery. For example, “Our customers like to use our imagery as a base map in their pre-planning process,” she says.

“There are certain regulations construction companies have to consider,” she continues, noting that clients can use Nearmap’s imagery to do site inspections to ensure the roads are wide enough for its trucks to travel to the job site. They also can measure distances to confirm they will be meeting noise ordinances.

The imagery not only saves its clients time in making initial visits to project sites, but also making second, third and even fourth visits. “Sometimes, you miss the one measurement on the side of the building,” Catalan says.

“Instead of sending a work crew down there, our customers are able to get the numbers through the MapBrowser,” she says, noting that clients can plot out access roads and where to build site offices and areas for storage. “It’s a companion to a lot of the design and the preplanning stage of construction projects.”

This not only brings benefits to Nearmap’s clients in terms of time, but also reduces costs of labor as well as maintaining and acquiring vehicles to transport workers. “Their margins for a project improve,” Frank adds. 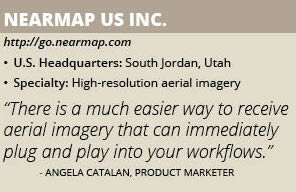 Catalan adds that a construction solar company has replaced 100 percent of its onsite inspection process with the use of Nearmap’s images. “Instead of going to the individual project sites, their preliminary site assessments are now done remotely through the MapBrowser,” she says.

“[They also can] do the project site plan and design on there because they’re able to get a close enough estimation,” she says, adding that the firm uses Nearmap’s imagery for its proposals and presentations.

In fact, Catalan says many of Nearmap's clients in both Australia and the US have used it to replace the majority of their on-site assessment needs. “We find a lot of our customers use us for the initial part of their workflow when they’re just getting their plans together,” she says.

Catalan recently met with an urban planning design firm that uses Nearmap’s imagery to look at the “before” and “after” stages of a location. “We capture frequently enough that they can see the project site before they came in and after all the installations were done,” she says. “It’s quite fascinating.”

This imagery also proves useful to show customers the progress on a project. “They are keen to be able to see visuals too,” Frank says, noting that this helps build trust between the contractor and the client during the preconstruction phase.

Like the contractor, the imagery also saves the client time in driving to the site. “They’re busy, too, because they’ve got their day jobs,” Frank says.

Nearmap has many satisfied customers with its technology, but it is not resting on its laurels. “The tools and content continue to evolve to meet the growing needs of the users,” Frank says.

One of Nearmap’s clients, a three-man roofing company, has used its tool to measure rooftops for its commercial and residential projects. “They specialize in flat roofs,” she says, adding that its products have saved the firm valuable time.

But the company also will soon benefit from a roof pitch and area measurement tool that Nearmap will add to its MapBrowser later this fall. Nearmap received requests from its customers to add the tool, since it is difficult

"to measure accurately without elevation data,"

Once added, clients will be able to use the tool to get accurate measurements to determine on how many shingles or how much paint will be needed to cover a rooftop. “We’re also looking at different ways to enhance our customers’ workflow,” she adds.

This may be accomplished via machine learning, the addition of high-res 3-D data or the integration of third-party data into its platform. “These are the different dimensions that we’re prototyping at this stage, but we’re going out to learn from our customers so that we can lead the industry,” Catalan says.

Today, Catalan says, Nearmap is a leader of aerial imagery in Australia and growing rapidly in the United States. “We definitely want to do that on a global scale,” she says.

Going forward, the company wants to become a bigger part of its clients’ workflow. For construction customers, “Nearmap could be a part of a day-to-day language when they do site assessment and site planning,” she predicts. “That is definitely a future we aspire to have.”

Because Highpoint’s areas of practice consist of land planning, civil engineering and permit expediting, aerial photography is critical to its work and extends into all areas of design. For example, “We use aerial photography with our proposals,” Vice President Michael Fabbiano said in a statement.

“We use it in concept designs, map design, design development and also for our color presentation plans for public presentations,” he added, noting that Nearmap was a strong application for two specific reasons.

The first was because of the high definition, resolution and clarity of the aerial photography. “The second piece is the amount of information and data that’s available,” he said. “It’s great to have access to multiple dates.”

Sometimes, Highpoint uses Nearmap to see what a site looks like during the winter as well as in the summer. “The fact that we can go anywhere in the country to see certain types of imagery and have the clarify that it offers is very powerful,” he stated.

“Nearmap really offers some powerful applications when it comes [time] to present in front of our stakeholders,” Fabbiano continued, adding that the company uses it across various platforms, including AutoCAD and Adobe Acrobat, without sacrificing any clarity.

Highpoint has had multiple occasions where clients and stakeholders commented about the clarity and high definition of Nearmap’s images. “It really adds value to the bottom line of how we present [to] the public eye.” Fabbiano said.

Another satisfied client is the city of Las Cruces, N.M. City Surveyor Scott Farnham, who addresses survey right-of-way and parcel boundary issues, found the company’s offerings to be particularly useful.

“One of my biggest challenges is to find high-precision, high-accuracy aerial imagery,” he admitted. “Our past aerial imagery was such that it was either outdated or had such poor resolution.”

But Nearmap, Farnham noted, has changed the way the city has approached its surveying. “The precision and accuracy and the resolution [are] just amazing,” he said, adding that it allows the city to do things it could not do previously.

“When we start a survey, we can do better planning for it,” he said. “It saves our time versus having to send people out initially. We can do that now in-house.”

Las Cruces also can look at various imagery from over the years side-by-side, so it can see the changes in the land. It also allows the city to answer locals’ questions more efficiently.

Chief Development Engineer Rocio Dominquez previously had to visit sites to address their concerns. “Now I can do it in 10 minutes,” she said. Nearmap’s imagery allows her to forgo a trip to the location and easily see what they are talking about.

City Traffic Engineer Soo Gyu Lee also uses Nearmap to address citizens’ concerns. When he gets a complaint, he uses the tool to look at the past and current condition of the street. “It’s [a] really, really vital tool to keep it up and then provide the customer service,” he said.

Farnham noted that he would recommend Nearmap to other municipalities. “The process of working with Nearmap when we started this service was extremely easy [and] very professional,” he recalled.

“Nearmap came in at the best cost for us,” he continued. “Not only is it saving us time and effort, but we’re able to do our work better.”