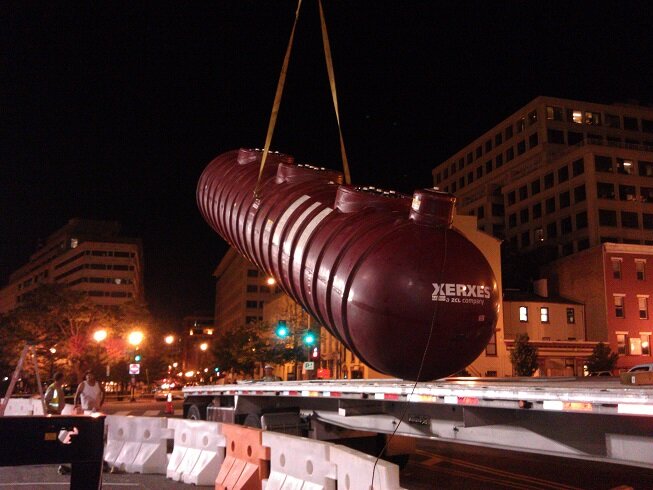 Tanks Direct’s product knowledge and diverse capabilities have made it a leader in its field for 25 years. “Having that much longevity in this market and industry is rare,” Sales and Marketing Director Rob Mourlas says. “That endurance speaks to the fact that we know what we are doing and we’re good at it.”

The Laurel, Md.-based company is one of the nation’s largest suppliers of aboveground and underground storage tank systems. Tanks provided by the company are used around the world to store water, petroleum and chemicals for applications including rainwater harvesting, fire suppression, dispensing fuel storage, emergency generator fuel oil systems and potable water storage.

In addition to distributing tanks, the company also provides complete turn-key installation services. “There are a lot of companies that are just distributors, suppliers or manufacturer’s representatives, and a whole different group that installs tanks,” Mourlas says. “We are the best of both worlds – we want to be a one-stop tank resource.”

Tanks Direct’s tanks range in size from 600 to 50,000 gallons. The company supplies tanks and related equipment from hundreds of manufacturers including Xerxes, the world’s largest manufacturer of fiberglass underground storage tanks. Xerxes manufactures tanks for a variety of uses including rainwater harvesting, data center cooling, fire suppression and wastewater disposal.

Tanks Direct is the exclusive distributor for Xerxes in Delaware, Kentucky, Maryland, New Jersey, New York, Ohio, Pennsylvania, Tennessee, Virginia, Washington, D.C.,  and West Virginia. “Before 2012, Xerxes had several different distributors,” Mourlas says. “Because we were the top company in our region, they gave us the exclusive territory when they were looking to work with only one distributor in the area.”

Tanks Direct works with its customers long before a tank is installed. “We do a lot of engineering work on the front end. Many of our customers ask us to come up with a proper design,” Mourlas says. “We can take a project from the first call prior to engineering, through to engineering, construction and training after installation.”

The company considers itself a turnkey system provider. “We can look at plans and drawings and help them figure out what we can provide and what they will need to get somewhere else,” he adds. “We try to simplify our process with a consulted sale so we’re not just taking orders.”

By offering a partnership with customers throughout their entire project, it’s easy to see how Tanks Direct’s turnkey approach has earned it repeat customers. The company works frequently with most of the larger mechanical and general contractors in the Mid-Atlantic and Northeast that provide the bulk of its business, Mourlas notes.

There are two main reasons for the growth of rainwater harvesting projects, the first being updated stormwater regulations that require water to remain on the property. The second is an increased focus on sustainability and green building standards – such as LEED — for commercial projects.

“Philadelphia and Washington, D.C. have regulations that recognize their infrastructure can’t handle a large amount of stormwater on top of everything else,” he adds. “These, and other, large municipalities want the first 1.5 inches of water that hit every building to not leave the property.

“You have to figure out how to stop that water from leaving the property,” Mourlas says. “One of the ways people do that is through rainwater harvesting.”

The company’s recent rainwater harvesting projects include installing a system at the Toledo Zoo in Ohio.  The client was looking for a more sustainable solution to their irrigation needs. Through an expansion, they decided to capture water in a 20,000-gallon Underground Xerxes storage tank.  This water is then sent through a water treatment skid and used for the irrigation needs at the zoo to nourish the gardens and grounds.

In the Washington, D.C., area, Tanks Direct has completed rainwater harvesting systems at local schools, hotels, large commercial office buildings and most notably the new D.C. Water Headquarters facility. At this facility, two 20,000-gallon underground cisterns were installed along with a treatment skid. Hanging from the ceiling in the main lobby rests a stainless-steel day tank which is used to capture water used for flushing each toilet in the entire six-story building.

Tanks Direct plans continued expansion to new products and sectors. “I would love to see us take on some additional products and services,” Mourlas says.