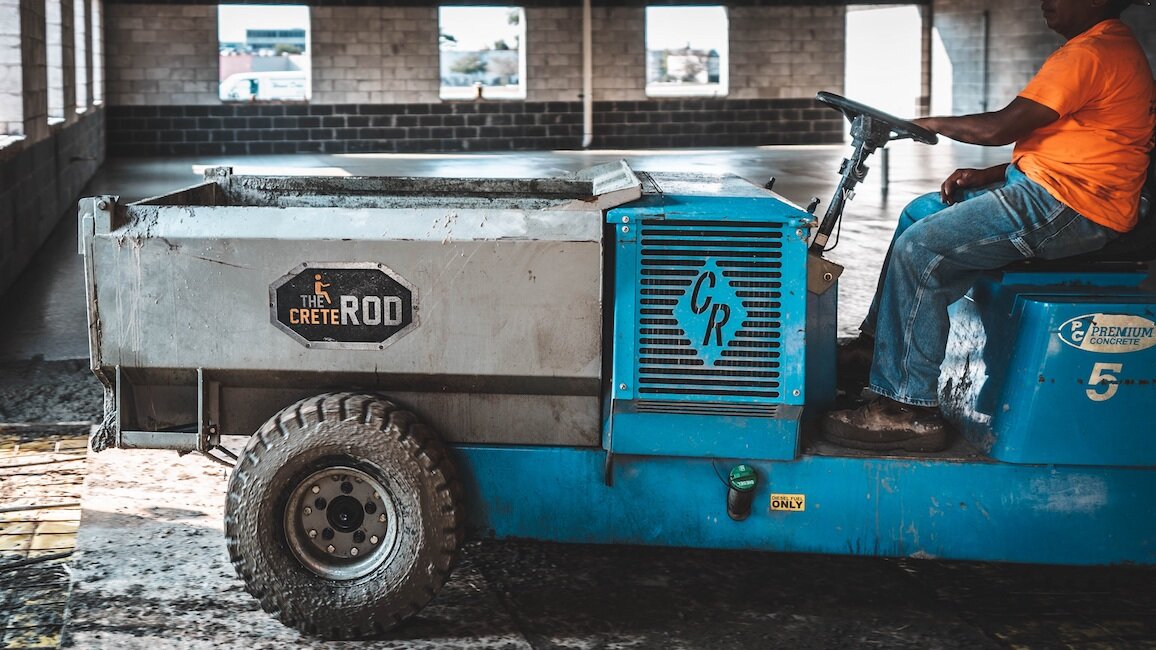 One of the most laborious activities in construction can be the transportation of materials on a project site, particularly concrete. The time spent moving materials can take builders away from other aspects that also need their attention. But that is where the CreteRod can help.

The three-wheeled machine features a 33-cubic-foot payload, allowing it to carry three times more material than competitors’ buggies. Dan Wilson, a flatwork superintendent for K&M Concrete Construction Co. in Edgerton, Minn., knows the advantages of the CreteRod from his own personal experience.

Most buggies, he explains, cannot carry more than a quarter of a yard of concrete. If he needed to pour concrete for a 300-foot barn, “It would take me six runs with a small buggy,” he says, noting that the CreteRod needs only one trip.

“Essentially, it takes five buggies out of the whole equation,” Wilson says, adding that this has saved K&M manpower, fuel and time. “As opposed to carrying a quarter of a yard in a smaller buggy, this one carries a yard and a third.”

The saying goes that “necessity is the mother of invention,” and need drove Jim Deetjen, the former co-owner of Premium Concrete Inc., to begin development of the CreteRod in 2009. At the time, his company used concrete buggies that featured a strong design but were showing their age.

Gordon Uhl, who oversees purchasing and equipment maintenance at Premium Concrete, explains that Deetjen was having trouble finding replacement parts for the machines. When the two discussed the problem, “My thought on it was to retrofit one of those old buggies with the technology of the day,” Uhl recalls.

But after the two started dismantling one of the buggies, Deetjen proposed they start from scratch. “Jim said, ‘If we’re going to do this, we’re going to build one from the ground up,’” Uhl says. “That’s really where it got started – when he made the decision to build a whole new machine.”

Deetjen and Uhl wanted the CreteRod to have the same features of the previous buggy, but added others, including all-wheel drive, making it more maneuverable. “Even though the machine is fairly sizable, you can get in tight places with it because of the way it is built,” Uhl says.

Deetjen’s son, Premium Concrete Project Foreman Dusty Deetjen, notes that the machine’s creation began as more of a fun project than anything else. “It was kind of a side thing that Gordon and my dad spent time on,” he says.

But after Deetjen and Uhl first used the CreteRod, they knew it was something that others needed to experience. “There’s no doubt that it’s the best one out there,” Deetjen says. “It is by far the best machine for moving material.”

Jim Deetjen brought his rough prototype of the CreteRod to Troyer Brothers Inc., an engineering and machining firm in Decatur, Ind., to mass produce the machine. President Mark Troyer says the company maintained a close partnership with Deetjen.

“We were very involved with tweaks and things he wanted to change,” he says, noting that his company came to know the CreteRod inside out before Deetjen passed away in January 2017. Today, Troyer Brothers is the exclusive owner of CreteRod, which is used primarily by general and concrete contractors.

The CreteRod is low-impact so it can work on finished lawns without damaging the landscaping, yet its powerful hydraulic all-wheel drive can negotiate even the most demanding terrain safely. The landscape and cemetery folks really like this. “We’ve been getting a lot of good feedback and a lot of people want to use them,” Troyer says.

One feature he highlights is the CreteRod’s twin-lock traction control system.  “TwinLock limits wheel spin and transfers the power of the wheel that wants to spin to the other wheels thus powering you through. On a normal drive system, if one wheel spins, it’ll take all the oil, leaving you stuck where you are,” he says.

He also praises the CreteRod’s bucket, which will dump concrete close to the ground with minimal splatter. Many attendees at the recent World of Concrete in Las Vegas appreciated this feature, Troyer notes.

Most buggies, he says, drop concrete at 14- to 16-inch heights or more. “We’re releasing it much closer to the sub-grade,” he says, noting that this avoids splashing on site walls or on workers’ clothes. “It makes for a much cleaner pour and saves on laborious cleanup time.”

Another satisfied CreteRod customer is Absolute Concrete Inc., a concrete contractor based in Slater, Iowa. Vice President of Operations Jason Bjork says he first saw the machine as a safer alternative to a standard buggy.

Other machines, he notes, require the driver to stand and use a bicycle-type handle bar that can shift when the buggy hits a rock or unforeseen object. “We’ve had some injuries,” Bjork says. “We thought [the CreteRod] might help us with that.”

Lead Operator Chuck Baker adds that Absolute Concrete often completes warehouse projects with 18-inch on-center rebar. While that can damage other buggies, “We can drive over that rebar [with the CreteRod],” he says.

The framework of the CreteRod, Baker says, also provides more protection to the driver. As they sit on the machine, “You’ve got something around you,” he says, noting that the company also uses the CreteRod for moving rocks. The CreteRod is a valuable tool for hauling building materials and demolition debris such as broken concrete. The bucket is made of steel which makes it less susceptible to damage on these types of jobs.

Absolute Concrete recently ordered three CreteRod machines and is currently using loaners. But the company may not stop there. “We’d like to order more,” Baker declares.

One client base that CreteRod is trying to grow is the equipment rental sector. Although construction dominates the company’s business, “The rental business is catching on,” Troyer says. “We’re getting a lot of interest.”

One rental company that carries the CreteRod is Division 3 Equipment Rental in Lilburn, Ga. Owner Kendall Monroe explains that the company rents specialty equipment to concrete contractors who can benefit from the machine.

For example, the CreteRod has more simplicity than a laydown pump system, which can be very labor intensive. “It may take three to four people to run a pumping system with set up, breakdown and cleaning system,” he says, adding that it also takes less time to train people to use the CreteRod.

“The CreteRod is basically putting everybody in a seat and telling them to go from point A to point B,” he says, noting that those who have driven tractors or riding lawnmowers easily grasp it.

Monroe personally witnessed Jim Deetjen demonstrate the CreteRod. “Because I watched him, I was able to know the tricks of the machine and to get the most value of it,” he recalls. “He was able to train people very quickly.”

Monroe also praises CreteRod’s Rental Split program, through which Division 3 promotes the machine to its clientele. At the same time, Troyer Brothers has helped bring customers to the store through its marketing efforts and lead generation.

“It’s a win-win,” Monroe says. “The Rental Split gives the rental business an opportunity to get the machine in there and get comfortable with it.”

Mark Troyer sees a strong future for his company, which may introduce new incarnations of the CreteRod product for mining clients working in tunnels. “We have people asking for flatbeds,” he says. “That’s something we’re working on developing.”

He also sees more potential for the CreteRod in the rental market as well as in the private sector. “Over a period of time, it becomes a huge savings to the independent guy that’s cost conscious of laying concrete,” Troyer says.

Monroe also predicts increased use of the CreteRod, as specialty flooring is added to more and more projects. “The CreteRod is going to be more valuable because there [won’t be] any other way to get the power buggies in there,” he says. “People will choose the CreteRod over a laydown system any day of the week.”

CreteRod creator Jim Deetjen gained extensive industry experience before developing his time-saving innovation. Initially, he started as a cement mason and worked for his brother’s concrete company before starting his own firm.

“He was well respected in this industry,” Dusty Deetjen says, noting that his father had a mind for engineering. “He always liked to make things easier and faster.”