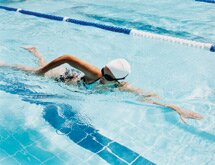 A highly anticipated civic center in the town of St. Stephen, New Brunswick, is on track to open its doors before the end of 2013. Nova Scotia-based general contractor DORA Construction in July 2013 poured the concrete slab for the ice rink that will be the centerpiece feature of the $20 million Garcelon Civic Center. Other recent work includes interior masonry work and the installation of seating surrounding the ice rink.

DORA Construction began work on the three-story, 91,000-square-foot civic center in May 2012. The building features a concrete foundation and structural steel superstructure, with insulated metal panels surrounding the exterior of the ice arena. The rest of the building, which includes a pool area and recreational and meeting space, will feature a brick exterior.

The architecture of the building will befit its surroundings in the town, which was incorporated in 1871. The architect of record is Architects Four Ltd. “The architecture in this town is incredible; in one block you can see four different styles of architecture from the late 1800s, and they’re all preserved lovingly,” Project Manager Carmen D’Intino says. “This is a great place to be if you’re a builder, because this is a town that really appreciates architecture.”

The town, located just across the Canada/United States border from Maine, is also known as “Canada’s Chocolate Town,” because it is the longtime home of Ganong Bros. Ltd., Canada’s oldest candy company. “This project will be a good addition to the town and serve as an anchor for it,” D’Intino says. “There’s a lot of local support for it.”

The civic center is a design/build contract. DORA is teaming with a number of local subcontractors as well as mechanical and electrical engineering consultants to complete the project. “All of the subcontractors have been great, and we’ve had no problems during project delivery,” D’Intino says.

The ice arena will feature an NHL-sized – 200-foot-long by 85 foot wide – ice surface and seating capacity for 1,050 people. The arena will also feature changing rooms, washrooms and shower facilities for hockey games, speed skating and figure skating training events and tournaments, as well as a storage area for ice maintenance equipment.

The thickness of the ice surface itself will be adjusted for various activities such as skating and hockey through the use of a computerized ice-making plant and control room.

Other features of the Garcelon Civic Center include multipurpose activity and meeting rooms for youth and adult programs, a year-round walking track and an aquatic center. The aquatic center will include a competitive pool as well as a leisure pool and an area with diving boards.

The building’s mechanical components include a refrigeration system manufactured by Kube Solutions that used a series of staged geothermal heat pumps to cool down the concrete slab below the ice surface. Based in Nova Scotia, Kube is a manufacturer of heat pumps for the geothermal industry. The pumps are designed to move heat from the slab to the pools, where it will be used to heat water, D’Intino says.

The Kube system is just one of the building’s efficiency-minded features, he notes. The building will also feature elements of passive solar design, where windows, walls and floors collect, store and distribute solar energy as heat during the winter.

“Municipalities are regularly worried about operating costs,” he explains. “This building is designed to have low overall energy consumption for a facility of its type.”

DORA Construction has a history of completing municipal and other projects dating back to 2003. The company also works in the commercial and industrial sectors. “Our motto is ‘a better breed of builder’,” D’Intino says, noting that the company specializes in collaboration through the use of technology. “We believe in listening to the owner and giving them what we ask for.”

The company is no stranger to building energy-efficient buildings, specifically those using the Kube system. “We’ve done these sorts of projects before, but here the mechanical and electrical systems have been taken to a higher level,” D’Intino says. “The trend for us since the 1990s is that each new building we do is more highly refined when it comes to energy consumption.”

Check out our latest Digital Edition!