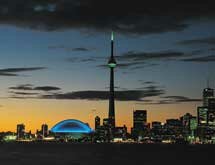 Standing out isn’t easy to do when you’re surrounded by others the same height or taller, but usually the right type of style is all it takes. That’s the case with X Condominiums, a recently completed high-rise residential project owned by Great Gulf Homes. Standing more than 40 storeys over downtown Toronto, the building may not be the tallest structure on the skyline, but its amenities and sense of style have made it a distinctive property in just a short amount of time.

The same perhaps could also be said about the project’s builder, Toronto-based Tucker Hi-Rise. Despite only being in the marketplace for less than a decade, the company already has developed a strong reputation for high-rise construction in Toronto. “We’re somewhat new on the market, so to speak,” Project Manager Rob Chiovitti says. “We’ve gained a lot of recognition and picked up a lot of work in the last four years, predominately.”

A lot of that work has been for Great Gulf Homes, and the X Condominiums project represents the latest chapter in what has become a prosperous working relationship between the developer and Tucker Hi-Rise. In 2002, Tucker Hi-Rise began as a construction management firm for high-rise developments, eventually branching out into project management and general contracting. Great Gulf has been developing projects since 1975, and has become one of North America’s leading real estate organizations, with a portfolio of projects throughout Canada and seven markets in the United States.

Completed for occupancy in August 2010, the X Condominiums project rises 44 storeys over the city and is situated in the middle of a neighbourhood in the midst of a revival. Chiovitti explains that the project is located at the corner of Jarvis and Charles in Toronto, an area of the city that is diversifying to include more high-rise residential developments. The area is not only undergoing a renaissance, but also is less than two blocks away from the heart of downtown Toronto, making it an attractive destination.

Constructing the 415-unit X Condo­min­iums project was fairly straightforward, Chiovitti reports, but was not without its challenges. While digging the foundations and the six-level underground parking garage, Tucker Hi-Rise encountered an underground aquifer that created some constructability problems with the site.

Tucker Hi-Rise’s response was to drill additional dewatering wells around the site to pump the excess water away and help stabilize the ground. Chiovitti says draining the aquifer was a monumental task that Tucker Hi-Rise was able to accomplish without incident. “We were pumping over a million litres of water a day,” he says.

Working to the company’s advantage was the fact that it was operating on a large site, despite its proximity to the bustling downtown area. This gave Tucker Hi-Rise plenty of room for staging, which was a big part of completing the project on time. Construction on X Condominiums began in 2006.

Featuring exterior architecture by arch­itectsAlliance and interior designs by Ceccioni Simone, X Condominiums is more than a standard residential high-rise. Amenities include a rooftop pool and garden, as well as a fitness area and lounge for residents. Chiovitti says Great Gulf is known for trying something different on all of its properties, and X Condominiums is no exception.

The project’s balcony railing system is unique in the fact that it is actually a modified window system. Chiovitti says this not only provides the exterior of X Condominiums with a more seamless look, but also eliminates the need for one of the trades.

The partnership between Great Gulf and Tucker Hi-Rise has been successful so far, and will continue with the development of the X2 Condominiums project. Construction on the 49-storey project featuring ground-floor retail space will be underway before the end of the year, Chiovitti says.

The success of high-rise projects such as these suggests that although construction may be slumping in other markets, high-rise construction is hot in Toronto. “The only way to go is up,” Chiovitti says.

Check out our latest Digital Edition!