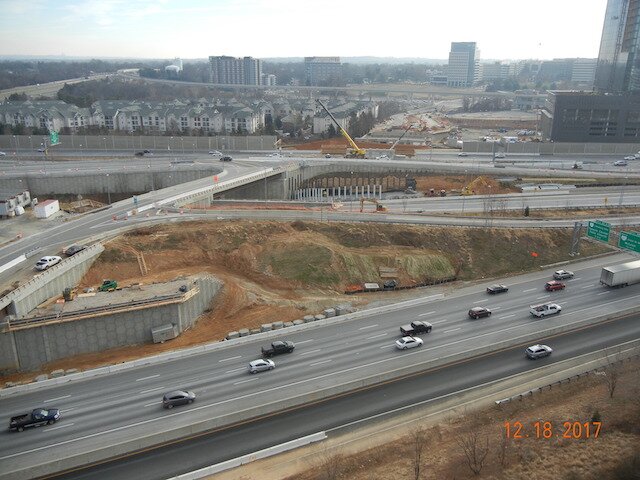 That ability is serving the general contractor well on the Jones Branch Connector project in Tysons Corner, Va., which will provide a link to Route 123 over Interstate 495, also known as the Capital Beltway. Archer Western will widen two existing bridges and build a new one over northbound I-495.

The company also will finish road improvements on the access road from Jones Branch Drive and along Scotts Crossing Road. “It’s a project that [Fairfax] County has been very interested in after express lanes were completed on the Beltway,” Doldan says.

Archer Western started on the $40 million project in April 2017 and plans to finish it in November 2019. By this coming December, Doldan says, the company needs to have the road open so that traffic can move in each direction.

The company also will have to have it substantially completed by October 2019. “So we have a very compressed schedule to accomplish a good percentage of the work,” he says.

For the last 10 months, the company has maintained access to the highly traveled highway as it has built the project. However, “There’s a lot of safety concerns and things you’ve got to take in account when you’re working around traffic,” Doldan says, adding that Archer Western is working in partnership with the Virginia Department of Transportation (VDOT) and Transurban Ltd., which manages and develops urban toll road networks.

Because Archer Western is operating in VDOT and Transurban’s jurisdiction, “We make sure we follow their safety policies as well as our own,” he says, noting that the team is dedicated to its safety philosophy of “No One Gets Hurt.”

Archer Western also has stayed on schedule, even with complicated tasks that include building a bridge right next to an existing one. “[Our] excavating systems allow us to build the project in existing areas,” Doldan says. “You have to dig right next to it and protect the system from being undermined.”

The company also completed a large amount of work before the frigid winter conditions set in. “We worked a lot of overtime in the last three months of last year to get where we are now,” he says.

Now that the ice and snow have hit Virginia, the project team is more limited in what it can do. “It becomes challenging to pave and build a road in those conditions,” he admits, noting that the company is focused on demolition and concrete work.

Another focus for Archer Western during the project is environmental compliance. The company has followed regulations including concrete washout areas, fuel tanks, the installation and maintenance of erosion and sediment controls and other environmental concerns.

The Virginia Department of Environmental Quality and other VDOT entities, Doldan adds, regularly performs inspections on the project site in partnership with Archer Western to ensure it is environmentally compliant with these regulations. Any deficiencies found in the inspection walkthroughs are promptly corrected.

Based in Atlanta, Archer Western is part of The Walsh Group, which is the 11th largest contractor in the United States. Doldan, who joined Archer Western nearly three years ago, praises the firm.

“They have a big focus on planning the work efficiently,” he says, noting that the quality of its staff allows it to “successfully tackle” projects of different sizes and complexities.

He sees a strong future for Archer Western, which will grow its presence in the Virginia area. “[We’ll] help with the improvement of transportation systems in the Washington, D.C., area and do our part,” he predicts.

Archer Western is building the Jones Branch Connector project to accommodate a future means of transportation, Doldan says. Fairfax County plans to install “a light rail system or similar that will connect both ends of Jones Branch,” he explains.

This has required the bridges to be bonded and ground electrically. For this, “Archer Western hired a consultant to develop a plan to electrically bond all reinforcing steel in the bridges,” Doldan says.