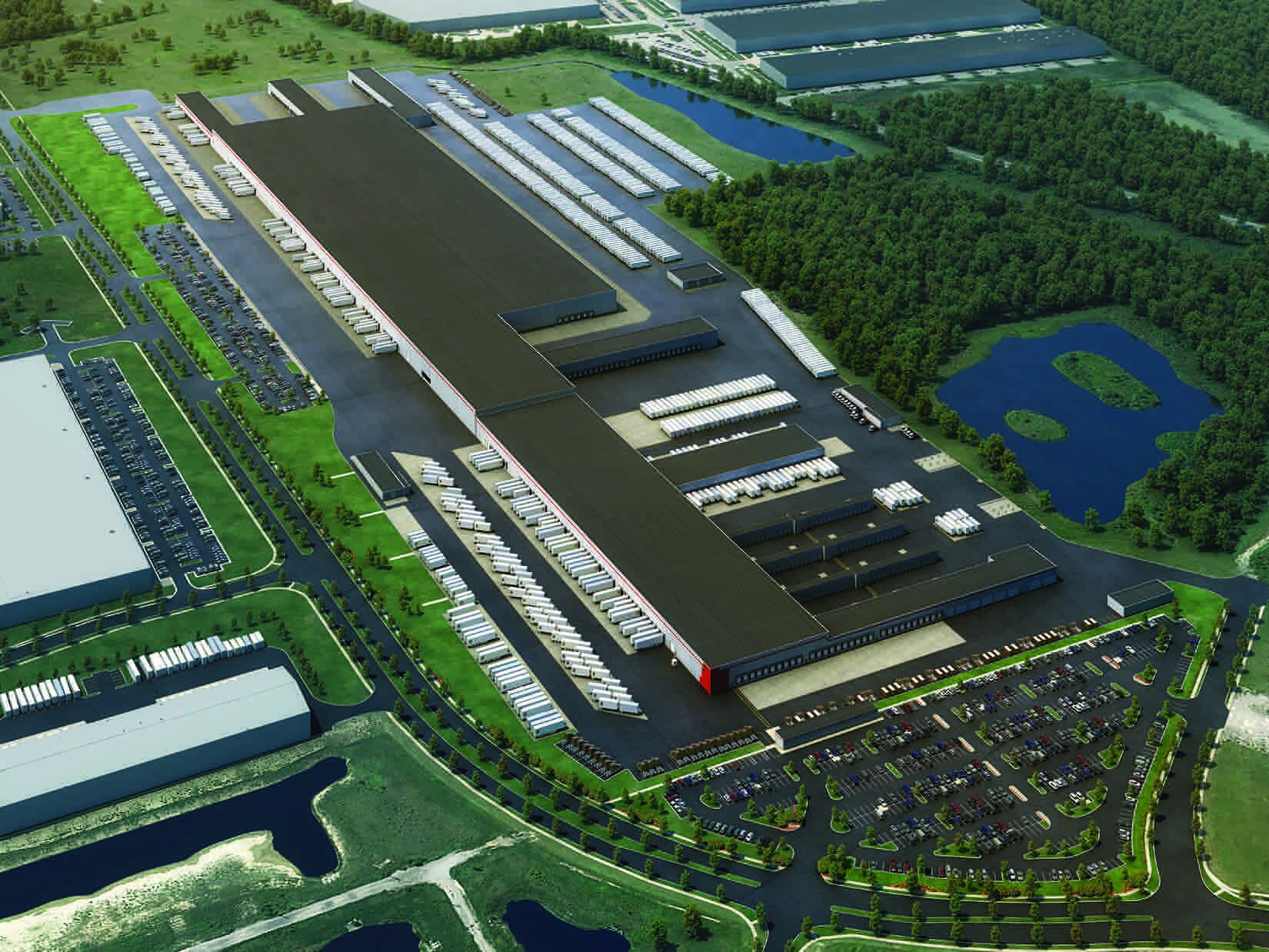 UPS delivers more than packages ahead of schedule, such as its new sorting facility.

In picking someone to oversee the expansion of its Centennial Hub packaging center in Louisville, Ky., it’s easy to see why UPS chose Jim Zimmer, its in-house project engineer. “I think like a UPS employee,” Zimmer explains. “When I’m working on the facility, I’m thinking about how a UPS employee would use it.”

Zimmer has considerable experience working on construction projects for UPS. He oversaw the $400 million UPS Worldport expansion in 2006, among other projects. The Centennial Hub expansion ranks right up there with UPS’s most ambitious.

Ultimately, it will triple the size of the current package sorting facility to 838,000 square feet, and nearly double its current sorting capacity to 85,000 packages per hour. In addition, the project will create a mix of 300 full- and part-time jobs.

To understand the significance of the project, one has to appreciate its location. One of the reasons Louisville remains such a vital region to UPS is its proximity to just about everyone in the contiguous United States. It is a two-hour flight to 75 percent of the U.S. population, and a four-hour flight to 95 percent.

It is also a vital location for UPS’s ground service: Two thirds of the population can be reached within a two-day drive. It is no small wonder that in addition to UPS, many e-commerce companies such as Zappos have set up distribution facilities nearby to get their goods to UPS quickly and shipped as soon as possible.

The Centennial Hub was originally constructed in 2007, UPS’s 100th-anniversary year. It provides pick-up and delivery options for customers in Louisville and the surrounding counties. With its proximity to the UPS Worldport air hub at Louisville International Airport, it also supports end-of-runway express service by allowing packages to be inserted into the Worldport operations as late as 1:30 a.m. Because e-commerce shipping has gone off the charts since the facility was built, UPS saw the need to greatly expand its capabilities. 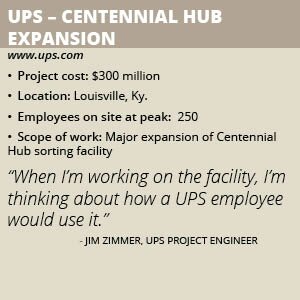 UPS elected to negotiate a construction management contract with Hunt Construction. Again, UPS opted for familiarity, as Hunt had worked with it on various projects before, including the Worldport expansion in 2006. “Our traditional method is a competitive bid for a general contractor,” Zimmer says. “But to save time and resources, we opted for a construction management contract with Hunt, and that has worked very well.”

If early results are any indication, UPS made the right choice. Though ground was broken in August 2016, in the true spirit of UPS, the first two phases of the project are already two months ahead of schedule. According to Zimmer, the building expansion will be fully operational in September 2018.

The reason for the fast start was that during the rough grading phase in late 2016, a cement subsurface was installed that stabilized the building pad. “We were working off a subsurface that was very stable,” Zimmer recalls. “We worked through winter as though it were summertime, so that was very favorable to us.” There has also been an acceleration in the construction of the material-handling segment of the building, as an additional crew has contributed to a more efficient buildout of that segment, working five days a week, 10 hours a day.

The Centennial Hub expansion represents UPS’s commitment to green technology, Zimmer says. The building is designed and built with the option to be powered by solar panels should UPS elect to do so. Further, the building will be connected to a CNG fueling station that will supply gas to the facility.

To power the building, there will be two underground feeds from a nearby substation, and there will be dual fiber feeds for connectivity and computer networking. “As far as power, networking and gas are concerned,” Zimmer notes, “this building is as bulletproof as you can make it.”

In addition to ensuring the building is well powered, there has been a concerted effort to make sure UPS employees will have an easier time working at their various positions. For example, the building is being built “dock high,” which means its entrances are the same height as the trailer floors on UPS trucks. That means employees won’t have to lift materials onto a trailer.

Zimmer says the building will really shine with its advanced, three-part sorting capabilities. The first is small package conveyance, which is really a series of conveyor belts leading all the way to the outbound vehicle area. The second is a small sort system with a higher capacity that is able to put smaller packages in bags. The last system is a slower-moving conveyor system for irregularly-shaped parcels that also does some automated sorting.

The technology upgrades will also include six-sided decode tunnels that capture package information from address labels. In addition, label applicators that place “smart labels” on packages for local delivery will provide UPS loaders with faster information about a package’s proper staging location in a UPS vehicle prior to transport. The idea is to improve accuracy and cut down on transit times.

When the expansion is completed, its impact on Louisville and the surrounding areas will be considerable. In addition to the 300 new jobs, many e-commerce distribution centers within the region will be able to make use of its enhanced capabilities.

The city of Louisville and UPS have a long-standing relationship, one that Zimmer appreciates, especially when it comes to subcontractors in the region. “I’ll say this, I have never worked as well with subcontractors as I have in Louisville,” Zimmer says. “I think they understand what UPS has brought to the community, and when they come to us with problems, they also come to us with solutions.”

“From a city perspective, Louisville’s metro government and the staff at the airport [where Worldport is located] have been very easy to work with,” Zimmer notes. “There is good synergy and they are always willing to help with permits or whatever is required, and they turn things around quickly. It has been a great city for the company to work in.”