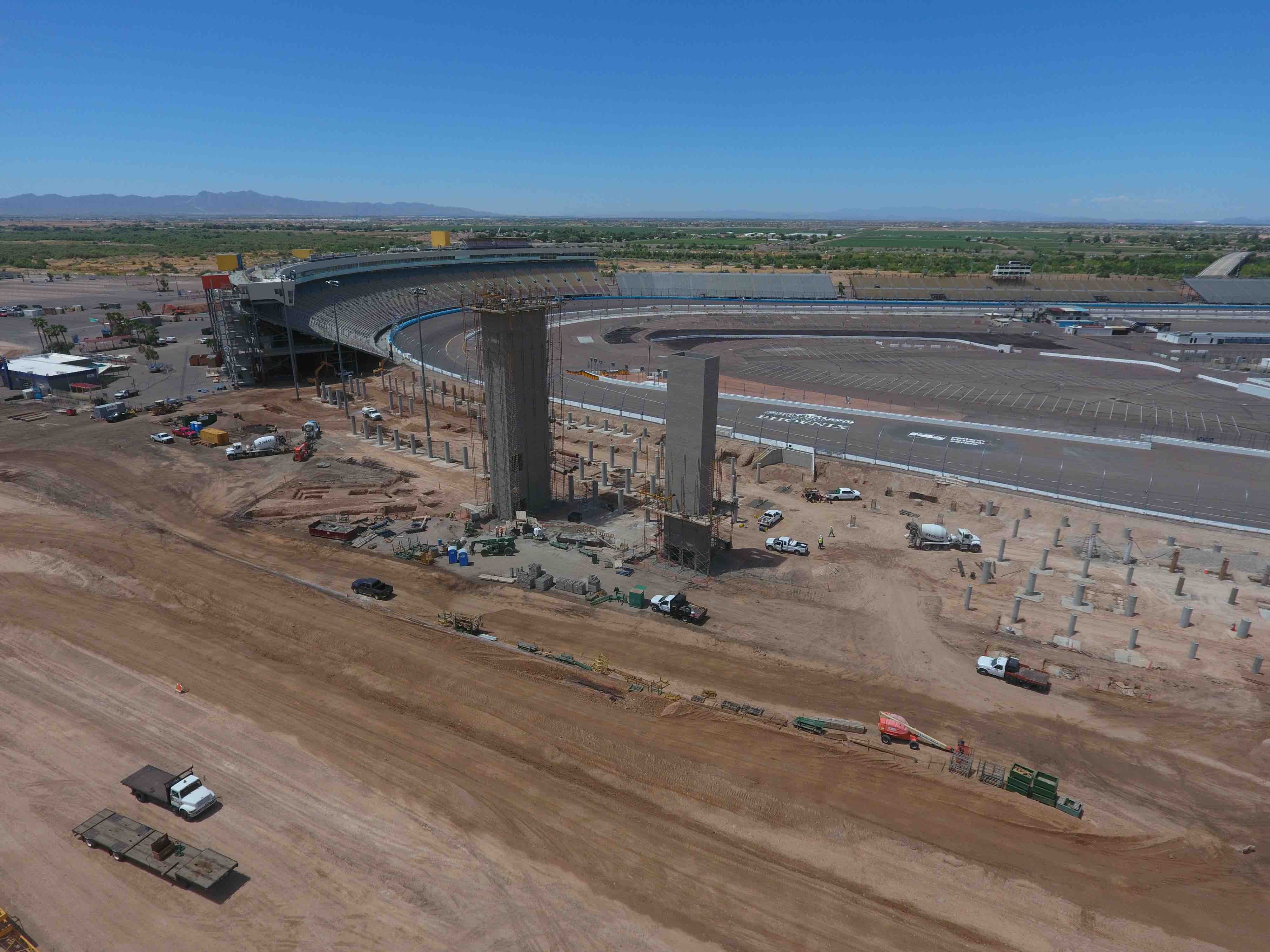 The first batch of steel for the Phoenix International Raceway (PIR) renovation was delivered in late May. For most projects, this would be a milestone for the client and construction crews, but the racetrack’s owners saw the potential to turn the delivery into a marketing moment. The city of Avondale turned it into a “steel parade” with a police escort for the four trucks hauling 80 tons of steel five miles to the racetrack.

Marketing is not usually tied to the construction process, but the public interest in the Phoenix Raceway project is an opportunity to excite locals and racing fans about the future of the 53-year-old venue. “We’re happy to accommodate and we’re excited for people to see what we’re doing,” says Glenn Kubricky, project director for Okland Construction, the lead construction firm on the project.

Built in 1964, PIR was due for a major overhaul. The racetrack was aging in some parts, lacked handicapped accessibility and was behind its peers in terms of amenities and the fan experience. Owner International Speedway Corp. (ISC), realized it needed to invest in the track to build its fan base and give back to the sport.

"While fans and drivers have continued to come back and enjoy Phoenix Raceway year after year, the fact was that the facility was in need of an upgrade,” PIR President Bryan Sperber says. "It’s been around for over 50 years and had not undergone any major renovation in some time. As the expectation for what fans want from a sporting venue continues to evolve, we felt that we needed to meet that criteria at Phoenix Raceway – and through this project, we’ve done that.”

The $178 million project was announced at the end of 2016 and encompasses a complete modernization of the racetrack. The existing bench grandstand will be demolished and replaced with 20-inch wide seats, a new 23,000-seat grandstand will be erected – bringing the venue’s total seating to 45,000 – and four new escalators and six new elevators will be installed to help guests get to their seats. All seating will have unobstructed views. The project will add premium RV parking, renovated suites, new concessions, ADA-compliant bathrooms, a bistro bar, and a rebuilt midway with a corporate hospitality bar and grill.

The fan experience is at the core of the modernization project. PIR will completely reconstruct the infield to add a new fan zone featuring car garages with glass sectional doors so fans can watch teams tinker on the vehicles prior to races. The infield will also have new dining options, guest services, emergency medical services, fire support and a tire center. A new pedestrian tunnel will connect the grandstands to the fan zone and infield.

One of the biggest changes for race fan will occur on the track itself. The start/finish line will be repositioned to what was originally the second turn to create more high-energy restarts during a race. “There was a lot of planning involved, even before the decision was made to commit the funds to the project,” Sperber says. “For more than five years ahead of it, we had been brainstorming and planning ways to modernize this venue. The finished vision that is being constructed is in large part due to the hard work of so many people."

The upgrades resemble the $400 million project recently completed at Florida’s Daytona International Speedway, also owned by ISC, albeit on a smaller scale. Barton Malow was the lead on that project and shared its experiences and practices with Okland when it came time to plan the PIR improvements. “We’re partnered with Barton Malow on this project,” Kubricky says. “They brought the project to us.”

Barton Malow contributed to the preconstruction effort and sequencing. Okland representatives visited Daytona several times to take notes on how Barton Malow handled the construction process. The PIR construction team also includes a superintendent and a project engineer from Barton Malow, although the rest of the field staff is from Okland.

“They bring the lessons learned, making sure we leverage their success on Daytona while avoiding all the pitfalls,” Kubricky says. “This is something new for Okland. We haven’t built this kind of venue before.”

Okland is acting as the lead for PIR and is responsible for much of the value-engineering to trim cost. When it was originally envisioned, the PIR improvements were expected to cost as much as $250 million. Since then, Okland worked with ISC and its subcontractors to discover materials and design changes to save money, resulting in the $178 million budget. “We had to take $70 million-plus out,” Kubricky says. “We had to relook at everything but we gave them pretty much everything they asked for.”

Another area where Okland learned from Barton Malow was in the race ready operations, the preparation that occurs before a race. Although PIR is undergoing substantial changes, the venue continues to hold NASCAR and IndyCar races throughout construction. To avoid disrupting events, the shutdown process begins about a week before a race and the total downtime is usually about nine days.

That’s not to say that all work ceases. During shutdown periods, Okland reviews construction progress and continues to coordinate with subcontractors so they can move quickly as soon as construction resumes. 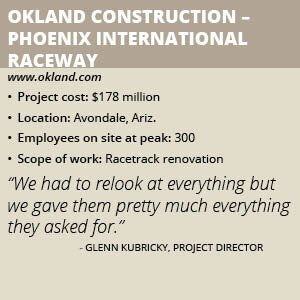 Like the stock cars zipping around the oval, speed is the key to the PIR project. Work began in mid-February and is scheduled to finish before the Can-Am 500 in November 2018, giving Okland about 21 months to complete the work. “We had to get this designed and permitted in a six-to-seven month window,” Kubricky says. “That was quite a challenge for our design team.”

To speed up the process, Okland broke the project into 10 packages that could be individually reviewed by the city. That way, the company could obtain the permits and begin work on sections that could be more quickly permitted, such as the storm drain system, while it simultaneously refined the design on other parts of the project. Okland preached urgency and worked with the project’s two major architects, Rossetti and DLR Group, to fast-track designs. The final building permit was obtained on June 7, about four months after construction began.

Work on the renovation of the existing grandstand, pedestrian tunnel, new midway bar and grill and new grandstands are underway this summer, but a lot of the most aggressive construction will occur next year. “The big, big push is going to be next spring and summer doing the entire infield in that five-and-a-half month window we have before that November race,” Kubricky says.

He knows it will be a challenge to meet that deadline, but Kubricky is confident Okland can finish the project on time. “I’ve never delivered a project late since I’ve started,” the 25-year construction industry veteran says. “It’s just not in my DNA and I have a team of professionals that feel the same way.

“We were excited to be a part of the project,” Kubricky continues. “We know this is a challenge and we love challenges. We thrive on it. We think we have a good game plan but we haven’t built one of these before. We want this to be as successful as Daytona was.” 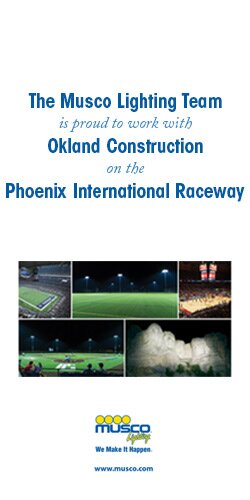