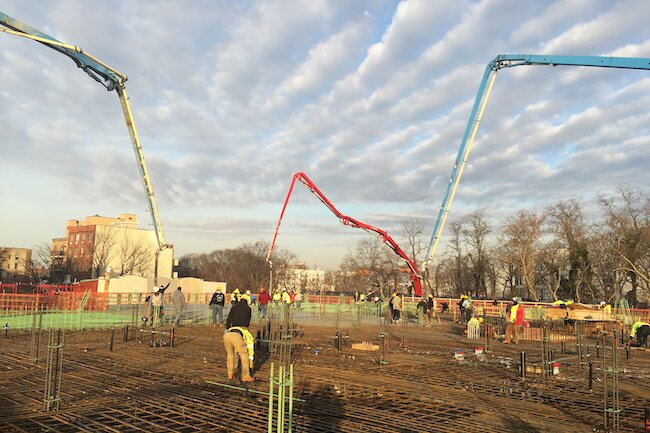 “Last year, we did $75 million in gross proceeds within a four-person overhead office,” he says. “This model is something we intend to maintain.” 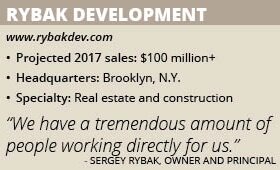 Rybak founded the company in 2007, but did not originally plan for a career in construction. “I have a bachelor’s degree from New York University in economics,” he says. “I quickly realized that the typical finance job after undergraduate school is not where I wanted to go.”

After trading his shirt and tie for a hardhat and boots, Rybak took jobs where he self-performed concrete framing work. “I worked hand-in-hand with guys to get the first couple of jobs up and built,” he recalls.

Rybak Development’s first job, he notes, was a six-family home. “We started out just hiring contractors to do all of the work for us,” Rybak recalls. The company later realized that this was not the most efficient way for it to do business.

“We have many people working directly for us,” he says. “This is what allows us to continue to thrive in New York and continue to be competitive in terms of the end product we produce.”

The company, he notes, is a leader in New York City’s outer boroughs. “We’ve been very fortunate to build product that has been well received in the marketplace,” he says.

The firm is selective in the work it takes on, Rybak asserts. “We try to look for and take on jobs that are not just standard, cookie-cutter buildings,” he says.

For example, the company was the first to build an LEED-certified building in the South Brooklyn area and it recently finished a building in South Brooklyn with a rooftop pool and other amenities. “We try to differentiate ourselves in a certain style and type of product,” he says.

“These relationships are only possible because of how well our products are received,” he says. “That’s a testament to the subcontractors and our material suppliers.”

“It’s all a honeycomb concrete structure design,” he says, noting there are walls along the sides of the building leaning in all direction. “It’s a pretty amazing feat [while] using concrete as a building material.”

The finished building also will feature an elegant lobby, an indoor and outdoor 6,000-square-foot park dedicated to its residents’ lifestyles, and a fitness center with cardio and strength training equipment. “That should be complete in September of 2018,” he predicts.

Rybak Development is coping with changes in its market. “We’re seeing that it is getting difficult to absorb new product, because there is more choice for the consumer,” Rybak says.

That has forced the company to deliver superior products with more innovations and amenities while keeping prices down. “I think people’s expectations are [greater for] what they should get for a dollar,” he says.

Rybak Development worked to meet those expectations on Element 88 with features that include 12-foot ceilings and 10-foot doors. “Those differentiating factors should make the building stand out with unique, architectural appeal,” Rybak says.

The company also sets itself apart by making its projects sustainable. “We use recycled materials and we try to go after the LEED standard whenever financially applicable,” he says.

Rybak is proud of his entire staff at Rybak Development. “It’s not one person that makes everything go around,” he says. “It’s a team effort. Everyone puts in their own type of effort that’s appropriate to their task.”

Rybak Development plans to continue building high-rise projects. “We seem to excel at that,” Rybak says, noting that the company also will maintain its high level of quality.

He adds that Rybak Development plans to expand its reach into Manhattan. “Our stakeholders are pushing us to explore that market segment,” he says.

Rybak Development enhances its employees’ skills with training. “We have employees that basically fall into our apprenticeship program where someone can get on-the-job training,” Rybak says.

Because employees excel as they gain more skills, “We’ll be more than happy to give them more opportunities,” he says, noting that all of the company’s foremen and managers were promoted from within.

The company, he notes, prefers not to bring in people from the outside. “We try to cultivate and shape our management always from within,” Rybak says. “All of our [people] like that because their destiny is in their own hands.”

Rybak Development keeps its employees safe with the help of Dunn Co Safety LLC. “They provide safety consultants, as well as safety training for our guys to be OSHA compliant,” Sergey Rybak says.

Dunn Co. also provides full-protection classes and an associate that will “visit all of our sites to maintain and document working conditions,” Rybak says.

Based in Long Island City, N.Y., Dunn Co specializes in safety services to clients in the New York City area. “Our mission is to keep our clients safe, protect their workers, their projects and their budget by staying up to date on current industry codes and mandates, and ensuring that their proper training requirements are met,” the company says.

Rybak Development says it has the ability to carry out medium- to large-scale projects, as well as the agility to finish them rapidly. “Recognizing that through lean project administration and clear communication between management and design professionals can projects be effectively delivered, Rybak minimizes overhead, maintains operational transparency and self-performs schedule critical path trades,” the company says.

This allows the company to not be burdened by heavy management layers, bureaucracy, competing interests and negotiation stalls. “The firm’s very structure is designed to deliver products to the market in industry leading time frames, while maximizing value for its stakeholders,” it continues.

Its team also works to add value to the development and construction process. “From securing entitlements that maximize a project’s habitable area while designing aesthetically progressive design concepts to efficiently constructing buildings that redefine the community aesthetic while benefiting stakeholders, Rybak’s hands-on approach of managing every step from planning to presentation has yielded a proven track record,” it says. 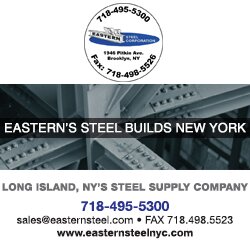 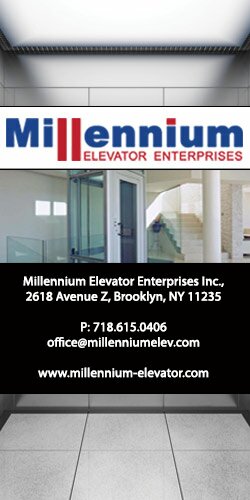