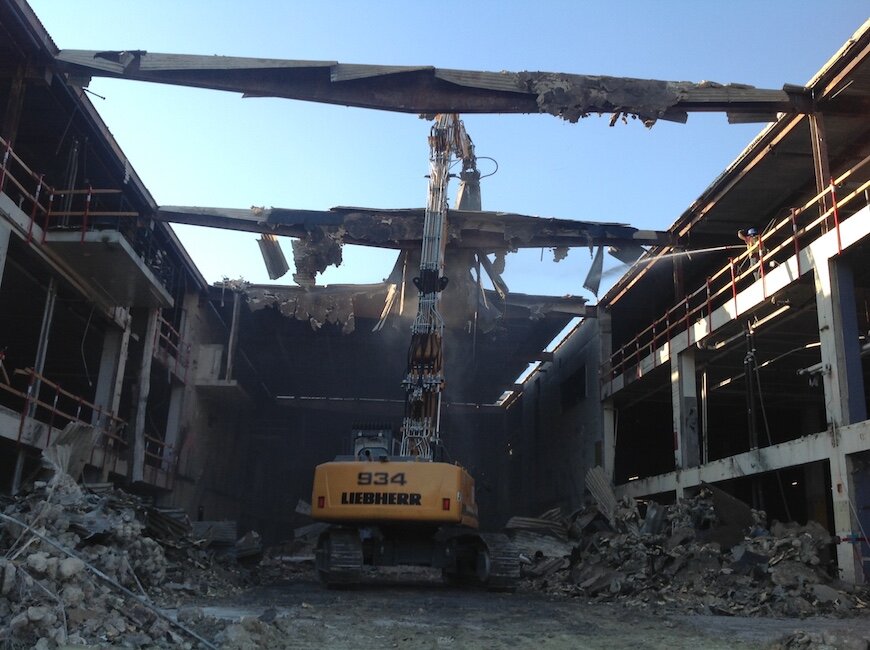 The Pasadena, Calif.-based firm is one of the oldest builders in southern California. Founded in 1919, the company will be celebrating its centennial anniversary next year. “That’s a pretty impressive number,” Myovich adds. “We’re proud of that.”

Over the years, C.W. Driver has developed a reputation as a

multi-faceted builder with a diverse portfolio that includes projects within the academic, entertainment and sports, retail, civic and cultural, commercial, office, hospitality and gaming, healthcare, residential and senior living industries.

One of the firm’s recent high-profile projects includes the Ampersand building, a historical redevelopment in San Diego’s Mission Valley. The former home of the San Diego Union-Tribune was transformed into a modern and amenity-studded work campus.

The five-story office tower is the former home of the San Diego Union-Tribune newspaper’s offices. The three-story building adjacent to it used to house the printing presses.

“It was an iconic fixture in the San Diego area,” Myovich says. “This was a significant project for us. C.W. Driver has been in southern California for almost 100 years, but our San Diego office is relatively young. To have an opportunity to be involved in a project that has so much history in our community connects us to this area in a way that is very meaningful for us.”

Built in the ‘70s, both buildings required a new sprinkler system, mechanical/electrical system and the plumbing was modernized. Both buildings also required exterior work.

“It is a red-brick building,” Myovich says. “The material for it was once collected in the Mission Valley area. We must have spent 90 days to find the right color to match this brick because it no longer existed.”

The majority of the work involved the three-story building.

What once was a windowless warehouse that housed a printing press turned into an office building with floor-to-ceiling windows, lots of open space and a new courtyard.

“We cut into the building and installed windows around the entire exterior building,” Myovich says. “Adding the additional penetrations required 19 new micro-piles tied into the existing foundation.”

Another one of C.W. Driver’s high-profile projects was the Valhalla High School in Rancho San Diego. The $32 million project consisted of renovating and modernizing the existing four-story building. One of the challenging aspects of the project involved the discovery of asbestos within the walls.

“The asbestos prevented us from seeing the existing mechanical systems behind the walls and ceilings,” Myovich says. “Once the abatement was completed we found out that there were major conflicts in the existing fire sprinkler system and new mechanical design. So, we went in there with laser scanning machines and we scanned the entire building.”

C.W. Driver had to find a way to identify, locate, coordinate, redesign and install a new mechanical system. The company used 3-D scanners to snap more than 260 images. “We then stitched them all together and created an existing condition model,” he adds. “These lasers are accurate within a 16th of an inch.”

During those four months, a production flow was worked out to allow for construction to continue in phases. “I worked with our subcontractors, and if we redesigned the music room on Monday, the following Monday I had ductwork, equipment and pipes installed in that space,” he adds. “We finished the project on time and it would not have happened if it wasn’t for virtual design and coordination in construction.”

Teamwork, Respect, Integrity, Commitment, Loyalty and Excellence. “Teamwork in conjunction with commitment is something my team embodies,” Myovich says. “Construction is challenging and imperfect and I think what allows us to persevere and turn over quality projects with good value is that we work together as a team and partner with our clients, architects and subcontractors. We see the process as being collaborative.”