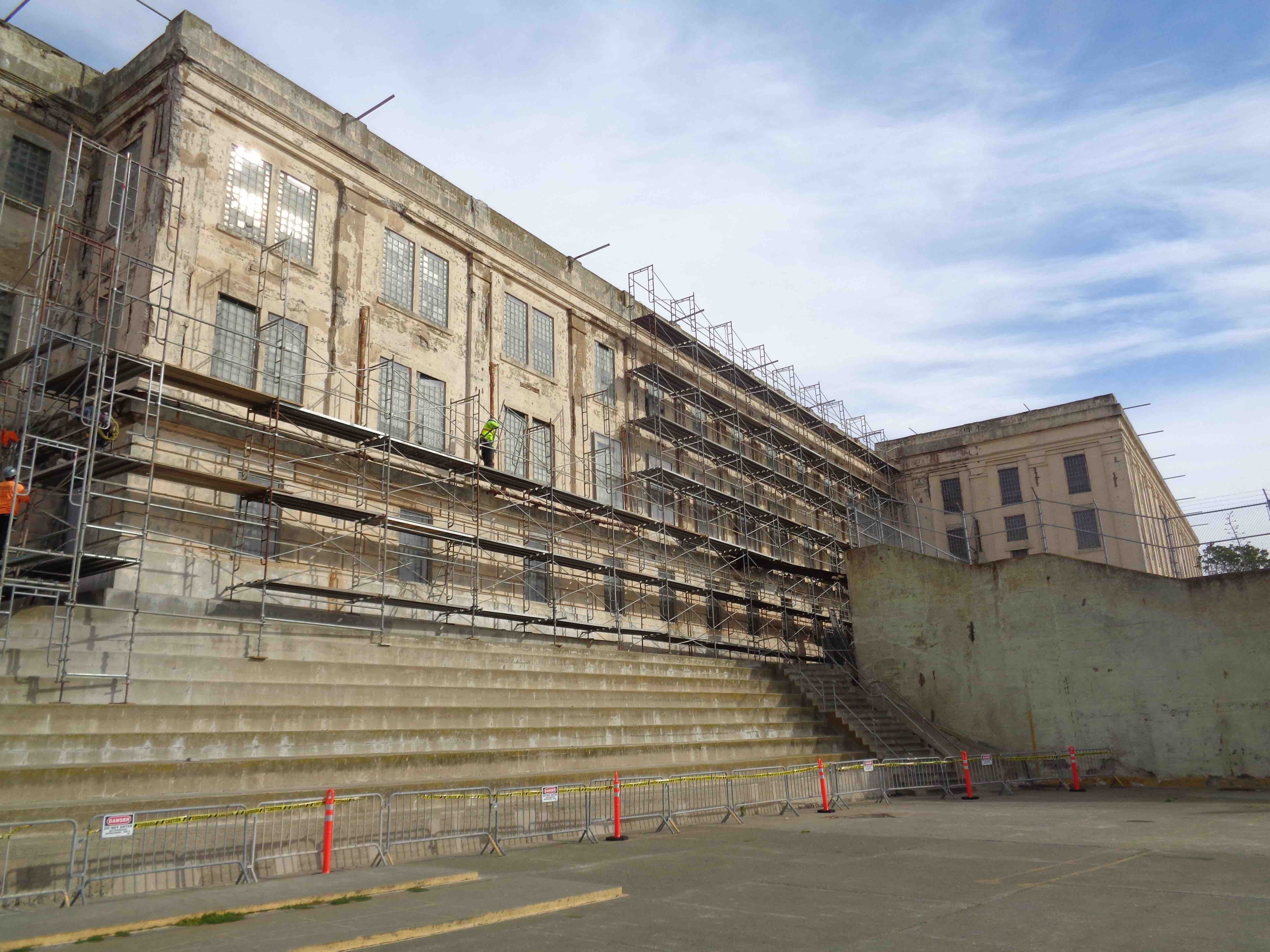 PMSI is on track to finish its restoration work on Alcatraz Island this fall.

Perini Management Services Inc. (PMSI) stands as a leader when it comes to working on U.S. landmarks. “Over the last six years, we’ve shown that we’re very capable in performing historic restoration projects throughout the country.  These projects include earthquake repairs to the Washington Monument, replacement of power and mechanical systems at Ellis Island, and power and lighting replacement at Carlsbad Caverns, to name a few,” Senior Vice President of Operations Brian Labbe says.

The company also has demonstrated that it can work on these sites while they remain open to visitors. ”We’ve performed multiple projects in accordance with the contract documents, while continuing full access to the public,” he says.

PMSI is bringing this capability to $15 million worth of work at Alcatraz Island in San Francisco. The company is restoring the exterior concrete walls of the famous prison, which was built in the early 1900s.

“It’s primarily a reinforced concrete structure,” Project Manager Bob Collie says, noting that the weather and salt water took their toll on the building over the years, causing cracks in the concrete walls and rust in the steel.

PMSI started work on restoring the facility in December 2015. “Our mission was to remove selected areas of the concrete walls, be it interior or exterior, and do the prescribed repairs,” Collie says.

The company has installed galvanic anodes to reduce the opportunity for continued rust. “We also are repainting the existing steel windows and installing new storm windows on the exterior to provide a better weather barrier,” he says.

PMSI aims to finish work on Alcatraz Island this October, which would put it ahead of schedule. “We’ve really stayed focused to keep an organized and efficient approach for all of the repairs,” Collie says. “All of the workers, materials and equipment have to be brought to the site by ferry or barge service on a daily basis.” 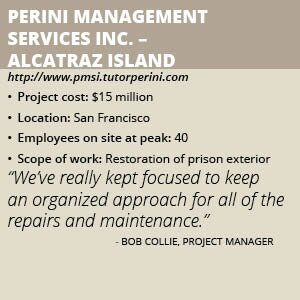 The company has stayed ahead even as tourists have steadily visited the island. “We never interrupted the 7,500 visitors that, on average, visit each day,” Collie says.

PMSI also had to be sensitive when working around local wildlife. “The birds maintain a protected status here,” Collie says. “We always have to be sensitive to noise to avoid any disturbance to the bird population.

“All of our scaffolding had to be assembled before the start of breeding season and disassembled after it is over,” he continues. Generally, this starts around the first of February and ends in September.

“We also have to be very careful to avoid any damage to the historic structure while performing the work,” he adds.

The company also has been pleased with the work of its subcontractors. “We enjoy a tremendous relationship because we truly treat them as partners, and they reciprocate.  This is key to a successful project,” Collie says.

Based in Framingham, Mass., PMSI is a subsidiary of Tutor Perini Corporation that specializes in construction services for U.S. federal agencies, multinational firms and foreign governments. “We pursue and execute a diverse array of construction projects both internationally as well as domestically,” Labbe says.

The company started operations in 1975 specializing in overseas construction for the U.S. Department of Defense. This took PMSI to remote locations in the Arctic, Africa, the Middle East and Indian Ocean, where it was able to hone its logistical skills.

Over the last decade, Labbe says, the company has seen an increase in its customers’ focus on quality control. “The expectation is that you have personnel solely dedicated to the contract requirements as they relate to quality,” he says.

“Although schedule has always been a focus, there’s now more emphasis on assuring the client that [we’re] going to be providing them with the required quality control,” he says, noting that this has been accomplished on the Alcatraz project.

This is largely due to the work of Collie and Quality Control Manager Mark Montgomery. “They manage the work, the client and the subcontractors with great skill,” Labbe says. “I am very appreciative of the work Bob and Mark have performed, along with the rest of the Perini team.”

PMSI plans for more success as it continues working with the United States government both overseas and domestically. “Our strategy for continued success is simply to provide customer satisfaction through quality and timely execution of work. Our objective is to continuously improve our process,” he says.

The company hopes to restore more landmarks like Alcatraz Island. “We view these iconic sites as national treasures and we consider it an honor to work on them,” he says. “We feel fortunate to have been afforded the opportunity to work on these historic sites and restore them for the enjoyment of all visitors.

“We are currently pursuing additional projects with the National Park Service as they are a valued client,” he adds.