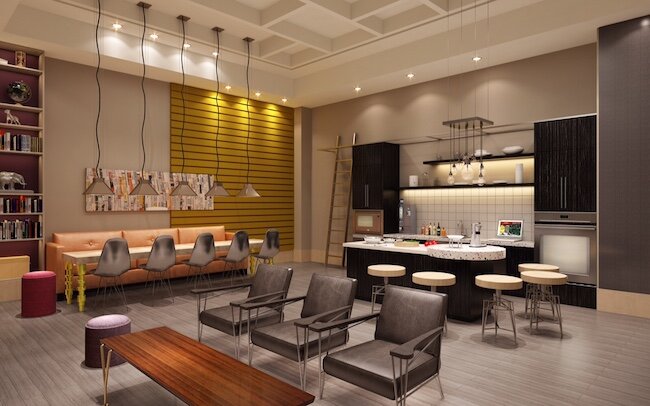 Bozzuto is building luxury living in The Village at Valley Forge development.

With four distinct, but united, divisions – development, management, homes and construction – Bozzuto is not only in the business of building properties, but also relationships with people, including subcontractors and clients.

Bozzuto's portion of The Village at Valley Forge development in King of Prussia, Pa., reflects that commitment. Bozzuto Development is developing Indigo 301, a mid-rise residential building, for Northwestern Mutual, a repeat client.

Located 20 minutes outside of Philadelphia and spanning 123 acres, The Village at Valley Forge will be the largest residential project the area has seen in the last 20 years. “It’s a very expansive deal,” says Bryan Logsdon, a project manager for Bozzuto Construction. “The site that we’re on used to be a golf course.”

The master plan for The Village at Valley Forge includes a town center with parcels for healthcare, retail, office and residential use. Indigo 301 will be a mid-rise residential building with 363 new apartment units and a 196,999-square-foot pre-cast parking garage with approximately 580 spaces.

Bozzuto Construction started building Indigo 301 in 2014 and plans to finish later this year. “Once completed, it will be managed by Bozzuto Management,” says Peter Sikora, a development manager for Bozzuto Development.

What makes Bozzuto Construction best for a project like Indigo 301 is its level of commitment, Logsdon says. “We’re very good ... in terms of holding our budget with the owner,” he says. “We pride ourselves on basically having less than 1 percent between our preliminary budget and our final bid.”

Bozzuto Construction manages this through a close attention to detail and keeping diligent. It also participates heavily in the predevelopment activities, Sikora says.

Indigo 301 will provide residents with approximately 12,000 square feet of amenities. “Our amenity package will elevate the area standard and will include unique elements that are not typical for this [market],” Sikora says.

These include three landscaped courtyards with a swimming pool, a state-of-the-art equipment and yoga area, a library, a golf simulator and an outdoor gourmet kitchen. Not only is this open to residents, but they “also can have outside chefs come in for classes,” he says.

He also is proud of the living spaces. “The apartment units themselves have top-of-the-line finishes and designs that residents will love,” Sikora says, adding that they also will feature oversized windows and water-saving plumbing fixtures.

The latter reflects the building’s environmentally friendly design, which will achieve the National Green Building Standard Bronze certification, Logsdon says. In addition, Indigo 301 has incorporated the use of ENERGY STAR appliances and resident-controlled HVAC systems to promote sustainability.

Bozzuto Construction is working around other projects being built in The Village at Valley Forge development. In addition to Indigo 301, other precast garages are being built, as well as two more apartment buildings, Sikora says.

“There is a lot of activity on the site,” Logsdon says, noting that the company coordinates with the other contractors so schedules are not delayed. “We’re confirming that all the materials are transported properly.”

Bozzuto Construction has kept safe while building Indigo 301. “We have a safety start plan that we require all of our subs to fulfill,” Logsdon says, noting that the subcontractors need to show that they have earned OSHA and CPR certifications.

The company’s in-house safety personnel also perform weekly, random inspections on the site. “They are diligent with their walkthroughs and provide guidance and feedback regarding any potential issues they may find,” he says.

Based in Greenbelt, Md., Bozzuto is a privately held, diversified real-estate services organization that has acquired, developed and built more than 42,000 homes and apartments while managing more than 54,000 apartment residences to date. Founders Tom Bozzuto, Rick Mostyn, John Slidell and Bernard Lubcher started the company in 1988.

The firm is a family owned organization that now is in the second generation of leadership of the Bozzuto family. Last year, Toby Bozzuto assumed the role of CEO from his father Tom Bozzuto. Tom Bozzuto remains chairman and an active member of the Investment Committee.

Today, Bozzuto places a strong emphasis on innovation, Bozzuto Construction Vice President of Business Development Kelly Cantley says. “Toby is always looking forward and thinking bigger,” she states. “It is an exciting time at Bozzuto. There is so much enthusiasm for our future and that inspires us all to look for new opportunities for growth.”

The company also operates with a strong emphasis on ethics, Logsdon says. If a resident found something wrong on a property after it was finished, “We would go back, fix it and make it right,” he asserts.

Cantley asserts that the company is in good hands. “It’s an exciting time for us right now,” she says. Toby Bozzuto “brings a dynamic and innovative energy. [It nurtures] this exciting, creative atmosphere where everyone is working together to deliver the best experiences and product for our clients, associates and residents.”

Tom Bozzuto remains very active within the company and continues to visit its project sites each week. Recently, “He walked the Indigo 301 project with our superintendent and pointed out things that he was concerned with and things he liked,” Sikora reports.

“You don’t see that a lot,” he continues. “I think that top-down approach shows that he cares and everyone else should care.”

“He puts an effort in making sure things are happening the right way and wants to have everyone’s insight,” Logsdon says. “That isn’t always typical.”

Cantley sees growth ahead for Bozzuto. “We’re starting to expand into new markets,” she says.

Bozzuto Construction is also looking to expand its geographic reach and product mix into hospitality, healthcare and assisted living. “There’s growth [ahead in both] market and product size,” she says.

Peter Sikora credits Bozzuto's success to its commitment to the four key values it was founded upon:

“Those are things we really focus on in our day-to-day work for Bozzuto,” Sikora says. “[We do that] as we work with partners that create relationships that shine through in everything we do.”