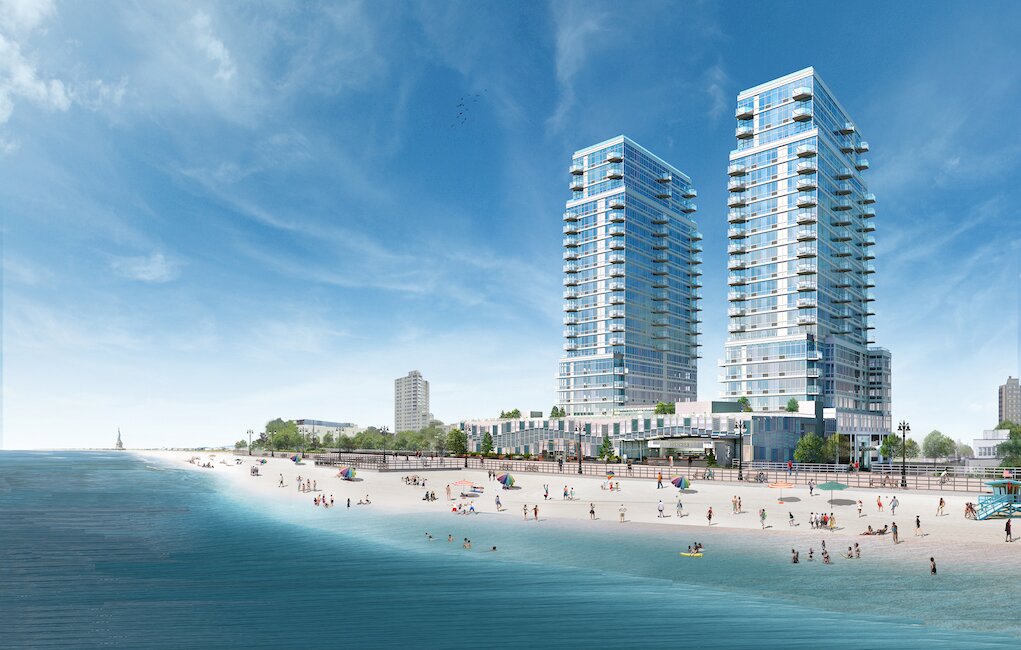 Hudson Meridian Construction Group’s experienced leadership and ability to meet its clients’ needs has earned the company the recognition of its peers.

Under the leadership of CEO and founder William Cote – who has more than 35 years of experience in the construction industry – today Hudson Meridian is ranked among New York City's Top 100 Contractors and the nation's Top 400 firms. Recently, the company ranked No. 6 on the “Top 20 General Contractors in NYC for Ground-Up Construction Projects” by The Real Deal as well as “One of the Largest Privately Held Companies in New York” by Crain’s.

Based in the heart of the city’s financial district, N.Y., Hudson Meridian offers construction management, general contracting and program management services to clients in the commercial, residential, institutional and municipal sectors.

“While we are mainly involved in new construction and restoration projects, we also have extensive experience in educational facilities, retail/commercial projects, waterfront work including parks, greenway, esplanade, marine and consultant management projects,” he adds.

The company follows OSHA safety guidelines on all of its projects. All workers are required to have OSHA 10-hour and job-specific site safety orientations, with supervisors required to have 30-hour training. Safety inspections are conducted biweekly, and superintendents are required to respond immediately and report incidents within 24 hours.

Hudson Meridian in May received the first certificates of occupancy for the Queens Plaza Residential Development in Long Island City, N.Y. The development includes multiple upscale mixed-use residential towers as well as a two-acre private park. Work on the project commenced in 2015, and remaining floor and interior work is slated to end this summer, Bana says. 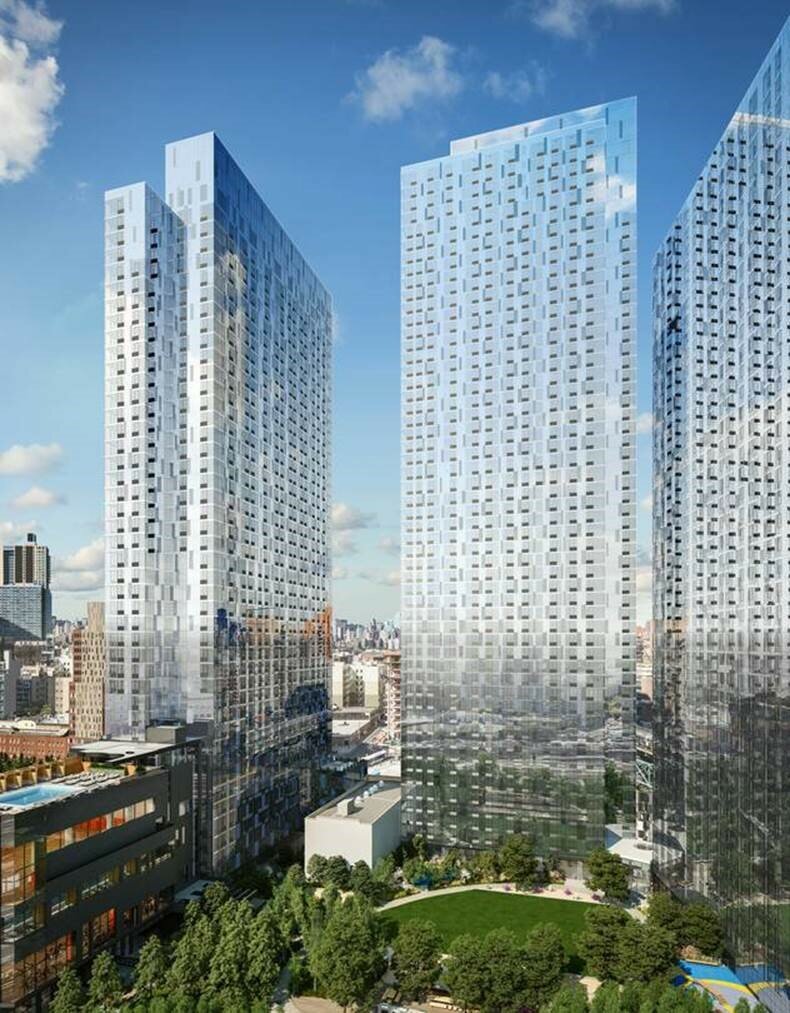 The company’s work on the $305 million project was split into two phases. Phase I included excavation and foundations for three residential towers – Tower A, Tower B1 and Tower B2 – as well as an amenity building and parking garage. Phase II included complete construction of Tower B1, which is approximately 611,000 square feet.

Tower B1 is a 57-story building with 658 units, a below-grade cellar with mechanical rooms, 4,858 square feet of retail space and a ground-floor lobby. The building features a hybrid curtain wall exterior.

The nearly 23,000-square-foot parking garage adjacent to Tower B1 will consist of 117 parking spaces and also feature bicycle storage, a loading dock and storage rooms.

The five-story amenity building has a steel and concrete on metal deck foundation with a façade of brick, metal panel, punched windows, curtainwall and a storefront. The building includes indoor and outdoor pools as well as a sauna, basketball court, squash court, game rooms, a demonstration kitchen and rooftop and outdoor amenity spaces, Bana says.

Queens Plaza is owned and developed by Tishman Speyer. The project architect is Hill West Architects.

Hudson Meridian in September anticipates topping off the two 21-story residential towers at the heart of Ocean Dreams, a mixed-use development located at 3514 Surf Ave. in Brooklyn. The towers will contain a total of 425 apartments and 327,778 square feet of residential space. In addition, the $175 million development will include 24,000 square feet of retail space. Work on the project commenced in May 2017 and is projected to conclude in October 2019.

The towers will have a cast-in-place concrete structure with a curtain wall exterior. Building amenities will include a business center, a pool, a three-level parking garage for 301 cars, two rooftop terraces, two tenant lounges and a fitness center. 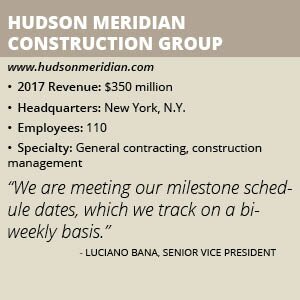 Hudson Meridian is serving as the construction manager for the project. “We are working in a residential beachfront community that is currently active and working to appease community boards and citizens with regard to construction activities scheduled in and around the site,” Bana says of the main challenge the company is facing during construction.

The company is maintaining site safety and security in a number of ways, including an electronic turnstyle security system that only admits people with authorized access onto the site. Deliveries to the site are overseen by a dock master, who checks inbound deliveries against the project schedule.

Hudson Meridian’s subcontractors are helping it keep the project on schedule. “We are meeting our milestone schedule dates, which we track on a biweekly basis,” Bana says.

The project’s milestone dates are scheduled in parallel with design work. “As design is being completed, we are helping to implement aspects of construction that help streamline the completion of the project,” Bana adds.

The company in 2016 broke ground on a 25-story, 272-unit residential tower at 16 Nepperhan Street in Yonkers, N.Y. The $135 million tower is part of Larkin Plaza, a mixed-use development that also includes a separate 17-story residential tower, a three-story parking deck and a two-story retail building. The 585,000-square-foot tower has a concrete superstructure on steel pipe piles. The project is anticipated for completion later this year.

“Situated one block away from the Metro North [rail line], and directly across from the recently day-lighted Saw Mill River, residents can enjoy walks along the water and can get to know their friends and neighbors in one of our brand new restaurants or shops located in thirty five thousand square feet of on-site retail,” developer RXR Realty says. The architect is SLCE Architects, LLP.

Site amenities will include a landscaped roof terrace with outdoor seating, an attended lobby with concierge services, a resident lounge, a media center, retail space, an on-site restaurant and a business center. Many apartments will have views of nearby Van Der Donck Park and well as the Hudson River and the Palisades cliffs.

Challenges faced by Hudson Meridian during the project include dealing with brownfield conditions. “We made lemonade out of lemons and were able to offer our client tax credits, which mitigated the effects of the delay,” Executive Vice President Richard Cote says. “We learned the need to preplan for subsurface conditions is essential to mitigate delays because of unknown and unforeseen conditions.”

Hudson Meridian is making significant progress on another project for RXR Realty. The company in March topped out a 28-story, 280-unit residential tower at 587 Main St. in downtown New Rochelle, N.Y.

The $94 million, 391,877-square-foot tower will include 28 affordable housing units, with the rest being market rate. The project will also include 298 parking spaces and 16,836 square feet of retail space including a 10,000-square-foot community black-box theater space.

The marquee of the theater will be a replica of the entrance to the Loews Theater, which opened in the late 1920s and occupied the site for several decades. Work on the site began in 2017 and is slated for completion in 2019.

The tower’s exterior features glass fiber reinforced concrete (GFRC) panels. “Finding affordable and reliable suppliers for these panels was struggle, but after trial and error, we ended up with a supplier in the Hudson Valley who has been great during the engineering shop drawing process and now is scheduled to deliver product this summer,” Cote says.

The company’s notable recently completed projects include The Eagle, a mixed-use skyscraper located at 86 Fleet Place in downtown Brooklyn. The 33-story building features 440 residential units, as well as about 10,000 square feet of ground floor retail space. The building was completed late last year.

William Cote has 35 years of experience in the construction industry managing all aspects of construction services for various property management groups, developers and institutional clients in New York City and the Tri-State Area.

During his career, Cote has managed complex institutional, public and private sector projects including landmark/historic buildings, government, residential, commercial, educational and manufacturing facilities. Before founding Hudson Meridian, he was the chief operating officer of one of the nation’s Top 40 largest construction companies.

Richard Cote has more than 30 years of experience in project management, facility operations and construction including extensive expertise in project development, planning and execution.

Richard Cote is a seasoned construction/facilities manager who has successfully completed hundreds of millions in construction during his career. His responsibilities as executive vice president include leading Hudson Meridian’s public sector division, which includes all of its waterfront and infrastructure projects in NYC.

Last year, Hudson Meridian added Peter Monte as its president and chief operating officer. He has more than 32 years of construction knowledge. In his role as COO, Monte oversees the firm’s ongoing operations and procedures and sets comprehensive goals for performance and growth.

Before joining the company, Monte worked as senior vice president for Toll Brothers City Living for 11 years. While there, he oversaw Toll Brother's design and construction activities in the five boroughs of New York City and Nassau and Suffolk Counties in Long Island and managed seven various stages of development in Manhattan and Brooklyn.

Prior to Toll Brothers City Living, Monte held various positions at Skanska USA including as a project director overseeing many of the company's largest construction projects.

“It has been a rewarding first year here at Hudson Meridian Construction Group. When I arrived I found a thriving CM firm which needed some standardization and controls implemented which would level out the product delivered to our clients on a consistent basis,” Monte says. “We standardized around a project management software and trained our employees in its use, training programs were also rolled out for cost control, quality assurance and quality control and OSHA 30 hour, with procurement and scheduling training modules on the way. We have also focused on developing new market regions and opened a satellite office in White Plains, NY, and will continue to look for opportunities regionally across different market sectors.”

He has also served as a senior project executive on multiple projects including The Addison, a $140 million project in Brooklyn. While working on the project, Bana was in charge of developing and maintaining anticipated cost reports and a schedule of values as well as staffing requirements, and subcontractor award and approval.

As a senior vice president and project executive, Bana provides leadership and oversight for the day-to-day operations for all the company’s construction and project management activities.

Some of his primary duties include client maintenance, subcontractor performance issues, constructability and technical issues, risk analysis and development and implementation of corporate policies and procedures.

“I also work closely with ownership lenders, consultants, and site representative to outline project controls and delivery methods,” he says.