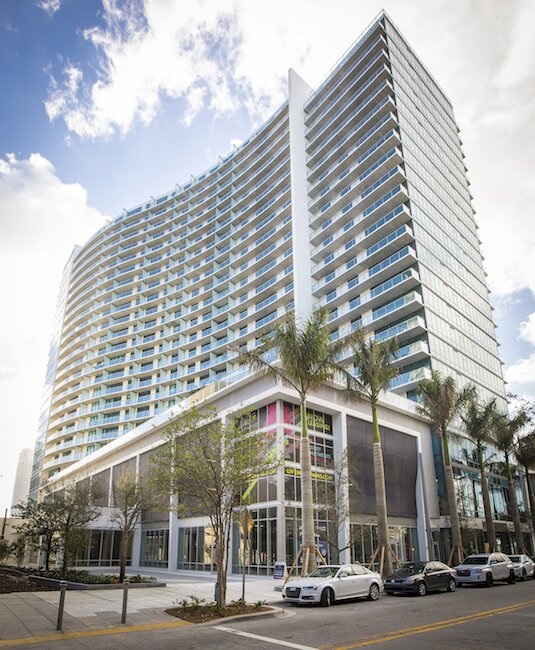 McHugh Construction brings a local, unique perspective to each of its multifamily projects.
By Alan Dorich, Senior Editor at Knighthouse Media

Not many construction companies can say they have been a defining force in their industry. But that’s not the case for James McHugh Construction Co. “We’ve been pushing the boundaries of multifamily construction since 1960,” Senior Vice President John Sheridan says.

Based in Chicago, McHugh Construction specializes in concrete construction, historic restoration, special-use and infrastructure projects in Chicago and across the country. But the company got its start in the multifamily sector in the 1960s when it built Marina City, the iconic residential towers in its home city.

At the time, Sheridan says, the 60-floor building was the tallest reinforced concrete structure to be built in the United States, and the first to utilize a self-climbing tower crane. Since then, it has become a staple of the Windy City’s skyline.

“It’s something that is top of mind when anyone thinks about Chicago’s architecture,” he says, adding that McHugh Construction has built more than 35,000 residential units since, ranging from low-rise affordable housing, mid-rise commercial properties, and luxury high-rise structures. A large portion of these buildings, he adds, are built with concrete.

“While we will continue to lead the high-rise concrete sector with significant experience in structures over 800 feet tall, our team knows how to enter a market and work with the materials and aesthetics that make sense for the local landscape,” he says, noting that its portfolio also includes Chicago’s Trump International Hotel & Tower. 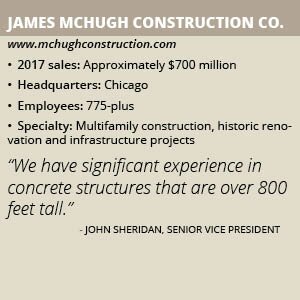 Sheridan asserts that very few U.S. competitors have a similar breadth of experience. The company’s history, which extends more than 120 years, gives its team a unique perspective and ability to work seamlessly with steel, wood and cold-formed metal.

“We assess the market, structural and geotechnical constraints at play and advise the developer on which construction method will be most cost effective in realizing their vision,” he says. “We are tremendous stewards of our clients’ dollars, and that is just one of the things that sets McHugh apart.”

McHugh Construction’s multifamily projects must be tailored for their respective communities, taking into consideration the local workforce as well as residential preferences, Sheridan says. The company started in the Chicago market, but “in the last few years, we’ve also worked in Minneapolis and St. Louis; and established offices in Nashville and Miami.”

One way McHugh teams find success in new markets is its ability to identify and partner with the strongest local subcontractors. Sheridan notes that, although they may not have the same level of expertise in high-rise residential construction, they know the community, which is advantageous to all project stakeholders.

McHugh Construction forged these partnerships when it opened offices in Nashville and Miami, allowing it to develop a robust network with subtrades, suppliers and the municipal authorities. “It takes time,” Sheridan admits, “but it’s well worth the investment.”

McHugh Construction takes a design-build approach to its residential projects, leveraging partnerships with experienced subcontractors to close the gap that exists between design and construction teams.

For example, when owners or developers hire a mechanical designer and construction managers hire a subcontractor, oftentimes they’ll find that there are critical project elements the designer cannot deliver. “Our approach minimizes the need for things like change orders, which in turn minimizes inefficiencies.”

McHugh has employed a design-build approach, particularly for the mechanical, engineering, and plumbing work, on its residential projects for the past 20 years. “It’s significantly more responsibility, but we prefer it that way, and it enables more aggressive timelines, which our clients appreciate,” Sheridan says.

Another way McHugh Construction maximizes efficiency is through the integration of web-based project management tools, including Procore, which allows it to share information with all stakeholders in real time, from pre-construction through delivery. Design adjustments, quality assurance training, unforeseen challenges, and subcontractor oversight can be managed in real time with the right tool. “The key is to make sure everyone is on board from the beginning, and that there is sufficient buy-in from all parties,” said Sheridan.

Previously, keeping people on the same page was notably more challenging. “In the past, what might have happened was an RFI would get submitted,” he recalls. “That would go back to the subcontractors’ offices, but the people in the field wouldn’t know about it.

Today, “Anybody on a tablet or smartphone in the field can pull up the up-to-date RFI or view photos of the most recent safety audit,” he says. “It keeps the drawings conformed and keeps the field more informed.” Sheridan also notes that systems like Procore assist in sharing requests for submittals, as well as meeting minutes and post-construction evaluation. “We’re a strong believer in those tools.”

When McHugh Construction approaches a project, it takes it from the perspective of a true builder rather than a manager. “We are in constant pursuit of solutions, leveraging new technologies and our own operational expertise on our projects as opposed to relying solely on subcontractors or architects,” Sheridan says. “If a project moves slower than it’s supposed to, there’s a tremendous labor risk to which, as a builder, we’re susceptible. We have to stay one step ahead.”

Even if McHugh Construction does not self-perform a particular element on a job, it maintains a sense of oversight and urgency. “Our ownership approach to the whole project is something that contributes to the client’s satisfaction and makes them come back to us time and time again for additional work,” Sheridan says.

McHugh Construction is proud of its ability to retain the best talent in the business, but also remains focused on recruiting and developing the next generation of skilled construction workers. Fortunately, many who work for the company as interns return to McHugh for full-time roles.

“There are a number of people who are running segments of our business now that came to us as interns,” Sheridan says. “Most of those people have been with us 18 to 25 years and have significant responsibilities.”

Some have joined the company after working for McHugh as a subcontractor. “[They] saw how we were doing things and wanted to be a part of it,” he says. “A couple of our current vice presidents came to us from other firms,” but just as many have been with it since the beginning of their careers.

Sheridan sees a strong future for McHugh Construction, which plans to pursue more multifamily work. “We are confident that our multifamily success and expertise will continue to help us grow in even more markets, delivering on our clients’ most exciting visions for decades to come,” he says.